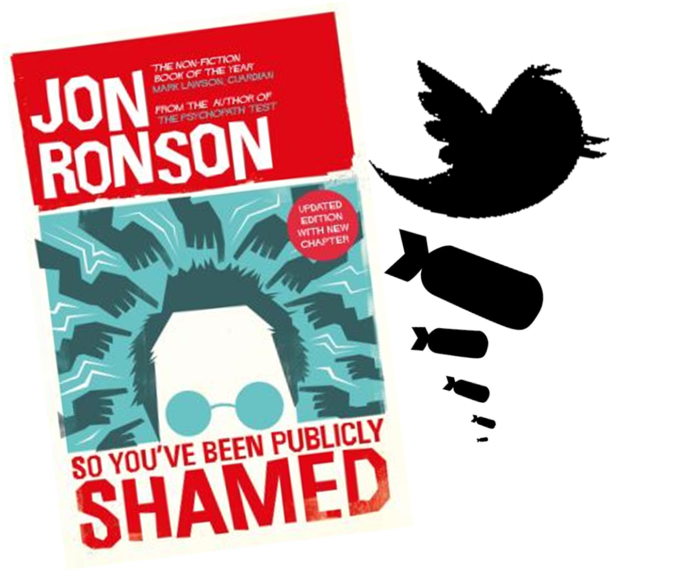 Discussing today: So You’ve Been Publicly Shamed by Jon Ronson

Hi everyone and welcome to today’s Book Club on http://www.themagichappinessof.com. Today we’re discussing Jon Ronson’s ‘So You’ve Been Publicly Shamed’.

It is an uncomfortable truth but lots of people buying this book will have been guided by the same motivation that causes us to slow down at the scene of a car accident on the motorway. In the UK this behaviour is called ‘rubber – necking’. Though most of us would attest that we find it disagreeable to rubber – neck, the tailbacks on Britain’s roads every Friday night would suggest that plenty of us are morbidly curios enough to see what it looks like when a life spins out of control.

The modern phenomenon of Twitter shaming described in ‘So You’ve Been Publicly Shamed’ ranks fairly highly amongst the things that can wake me up screaming in the middle of the night. Just how bad does it feel when 20 thousand or 50 thousand, or in the case of Justine Sacco, the PR executive who tweeted an ill advised joke, when over 1.2 million people focus their fury on you?

Ronson chronicles public shaming from it’s medieval role as a weapon of justice to some of the worst social media shamings of recent times. He travels the world interviewing the victims about their experiences before, during, and as they try to piece their lives back together, after the shaming. The case studies range from journalists caught fabricating stories to a learning support worker who defiled a national cemetery. In each case the spiral from basically happy, ordinary people, to central figures in the story of their own demise, is precipitously fast.

Social media presents a fascinating opportunity to study the dynamics of large populations. Never before in human history have we all been so interconnected. The theory that everyone is connected to everyone else in the world by just 6 degrees of separation was postulated by the Hungarian author Frigyes Karinthy in the 1920s but new research shows that the figure needs updating. Studies of Facebook reveal it’s more like half that number, and with the opportunity for complete strangers to follow you, I would imagine that Twitter returns an even smaller degree of separation.

The upshot of all this connectedness is that we’re dealing with a social landscape that we didn’t evolve to operate in. In his book The Organized Mind (incidentally also the subject of this week’s self help binge) Daniel Levitin gives and illuminating analogy,

Now the number of people we can reach in the click of a mouse button dwarfs the world population in the year 1200. Something humans are particularly bad at grasping is the scale and the reach of social media. Just why do otherwise normal, well – adjusted people descend into a vicious frenzy of denouncement when a target emerges on Twitter? Ronson investigates the theory of group madness as a possible explanation.

Published in 1895, Gustav Le Bon’s The Crowd, was the central text in the study of crowd dynamics. The work is referenced in Bill Buford’s superlative study of British football hooliganism in the 1980s. During the 80s displays mass social unrest could be witnessed in virtually every city centre in the country as rival hooligan ‘firms’ battled each other for supremacy on the terraces. The scale and brutality of the violence is staggering when regarded from a contemporary vantage point.

why do young males riot every Saturday? They do it for the same reason that another generation drank too much, or smoked dope, or took hallucinogenic drugs, or behaved badly or rebelliously. Violence is their antisocial kick, their mind-altering experience, an adrenaline-induced euphoria that might be all the more powerful because it is generated by the body itself, with, I was convinced, many of the same addictive qualities that characterize synthetically-produced drugs.

Social media certainly has it’s addictive properties. That adrenaline – induced euphoria that Buford talks about? Every re-tweet, new follower or like that you receive on Twitter creates a little release of dopamine – a hormone associated with the brain’s response to pleasurable stimuli. So social media has a measurable effect on the brain’s biochemistry.

We express our opinion that Justine Sacco is a monster. We are instantly congratulated for this…

And so we are more likely to believe that it is true. He also notes that you are only likely to share information on Twitter that is likely to go down well with your circle of followers.

So You’ve Been Publicly Shamed is a difficult read in many ways. Not because of any defect in the writing which is lucid and intelligent, or the arguments which are backed by infallible reasoning. It is a difficult read because it holds up a mirror that shows a distorted reflection of society. A society viewed through the warped lens of social media. A social world where the voices of moderation and reason have been filtered out of the conversation leaving only the raging poles of opinion. Is 170 characters too short to sum up all the shades of meaning and nuances of language needed to communicate effectively? I think it probably is, and maybe the move to abolish the character limit for a Tweet might be a good thing.

Comment below or tweet me. Let me know what you thought if you’ve read this book or any of the others mentioned. Happy reading.